We are part of this universe, not simply within it. We are products of nearly 14 billion years of evolution from an incredibly hot and dense beginning. First, simple atoms of hydrogen and helium had to form as space expanded and cooled. Before a planet could evolve life, these simple atoms had to form stars that would fuse heavier elements. These stars had to burn out in violent explosions that would seed new solar systems like ours with the elements necessary for life. After more than 9 billion years of cosmic evolution, our planet formed and began to evolve life. In this little corner at least, we are the first pieces of the universe with the ability to look out at the night sky and understand it. We are the universe coming to know itself.
Available tomorrow on Every Day Original 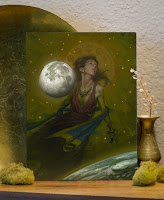