While sketching one night at the coffee shop I felt someone watching me. I glanced up towards the front of the shop and saw a very pretty girl watching me sketch, the kind of pretty that hits you in the face and leaves you momentarily stunned. This was about all I could surmise from my glance as it would have been awkward to hold eye contact for any longer. Moments later she walked out of view and a few of the people I was sitting with voiced something I did not catch in my glance. Jonathan said, "Now that was an attractive girl... with a very unattractive attitude."
Though, before anyone could say much more she returned with a man, holding a large piece of chocolate cake served at the counter. They stood, waiting for a table, all of which were occupied at the moment, and she continued to watch me sketch. They did not talk, the man held the piece of chocolate cake and neither of them took a single bite.
I did not see it while I was sketching, but Jonathan told me later that after about ten minutes someone came and told them that there were available tables on the other side of the shop. Despite their patience, she replied ungraciously, "No, we'll wait."
Another five or ten minutes went by before the gentleman at the table directly ahead of me, along the wall, got up to leave. The girl sat down abruptly in the seat closest to me, the man across from her, setting the cake between them. She did not face the man, but flipped her hair and turned ninety degrees in profile to both him and I. She put her chin out and looked at the far wall, motionless.
I almost had to laugh, just as Jonathan had said, it was quite amazing how profusely she exuded both her good looks and her bad attitude. I considered drawing her, it was tempting. I really would have liked to have a drawing of her to go with this story. She thought that I would not be able to resist her beauty, and in a crowded coffee shop, without asking, I would draw only her. She wanted that satisfaction, but I could not stand to feed her voracious vanity. So, I looked to the side and I began to draw another girl.
Five minutes went by, she didn't move, she didn't talk to the man who sat sighing with the untouched cake between them. Then, she got more impatient, flipped her hair again, huffed, and stuck her chin out even farther, leaning forward from the wall now and into the aisle. I continued to draw the other girl. After another five minutes, she huffed again, turned to the man and said curtly, "This isn't wroking," before standing up and walking off with the man and the untouched piece of cake in tow.

I don't have a drawing of her to show, but here are the three drawings that I did of the other girl... 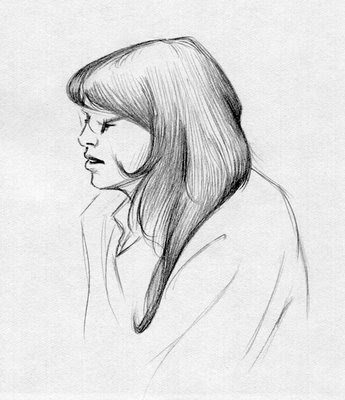 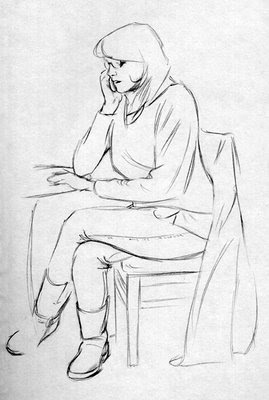 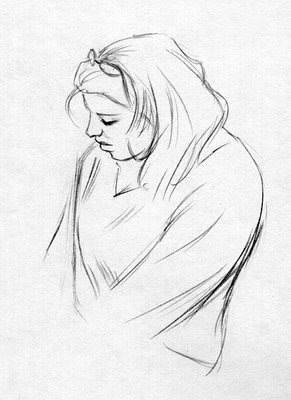