Earlier this month, I had a great time exhibiting at Illuxcon, the best convention for imaginative realism. It was full of great people and great conversations! It was extra awesome this year to have my image on the program cover, and other show materials. 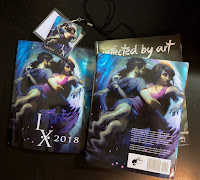 And finally, here are some Detail shots of my last completed painting, Hubble: 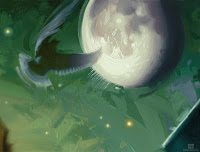 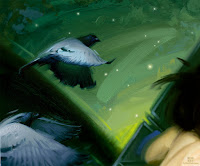 
Since it’s launch in 1990, the Hubble Space Telescope has produced some of the most spectacular images of our universe. In 1995, the spirit of discovery led the Hubble team to point the telescope at the darkest patch of sky they could find, not knowing if they would see anything at all. In that patch of sky, the size of a pinhead at arms length, the Hubble Deep Field observation revealed 3,000 galaxies stretched out to distances of up to 13 billion lightyears. Since looking deep into space is also looking deep into the history of the universe (when the light left it's source), the observation was our first nearly complete view of the entire history of the universe in one image. Hubble’s observations narrowed our knowledge of the age of our universe to a decimal point of accuracy (from a range of 10-20 billion years down to 13.7 billion) and brought us that much closer to understanding where we sit in this vast and beautiful space-time.

Take a look at the Hubble Deep Field Observation here or check out other Hubble images.


In our pursuit to understand the solar system we find ourselves in, we sent an explorer to the Saturnian system. The Cassini Spacecraft sent back amazing new data and images of Saturn and it’s 62 known moons, 46 of which were unknown when it left. We learned that the moon, Enceladus, may have everything it needs to support life deep in it’s global ocean, Titan has a liquid methane sea, and so much more.

Last year, low on fuel after twenty years in space and so much information gained, Cassini took several dives between Saturn and it’s rings to learn a little more before it’s mission came to an end. To avoid possible microbial contamination of any of Saturn’s moons, Cassini dove and burned up in Saturn’s atmosphere, while sending back it’s final data.